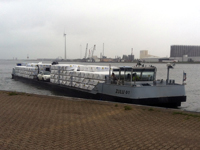 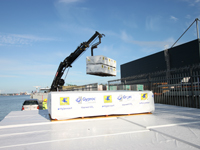 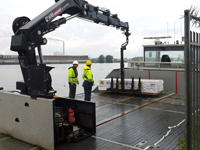 Blue Line Logistics has been selected as one of the 22 innovators creating new solutions for durable logistics by the City of Paris, Paris & Co and their partners, to be tested in the Paris area in the coming year.

The list of all the innovators can be found on http://expe.parisandco.com/logistique-urbaine. 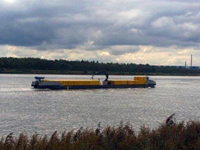 Loading bags with cement for Satic Minera in Tournai for Brussels area. 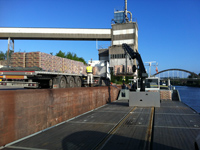 Zulu 02 on its maiden trip with cement in bags. 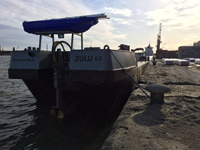 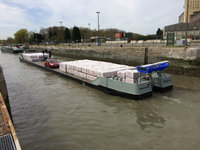 Zulu 02 was officially commissioned on 29 March 2015 by Ben Weyts, Minister for Mobility of the Flemish Region and will start operations on 7 April after final fitting out. 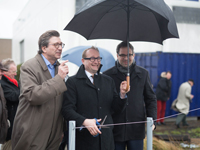 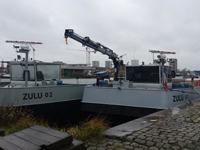 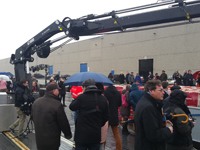 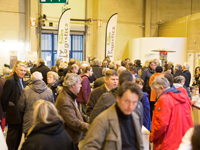 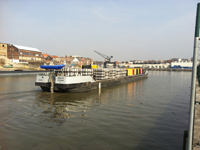 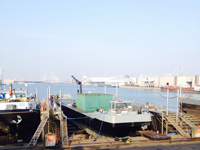 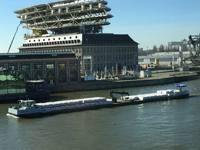 ZULU 02 has been launched on February 2nd and will be fitted out in the coming month to start operations in March/April. 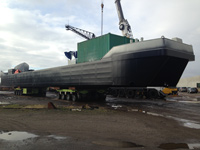 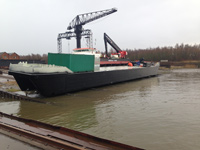 ZULU 01 has been operational in the second half of 2014 for Wienerberger and Coeck Betonfabrieken and Blue Line Logistics is poised to increase its activity substantially in 2015. 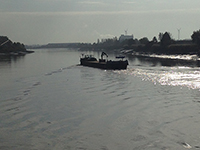 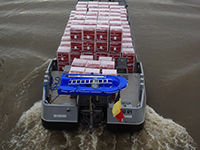 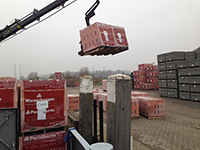 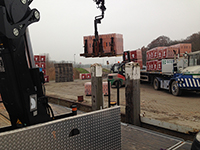 On 20 August ZULU 01 went successfully through its trials and will start operational trips on 25 August. 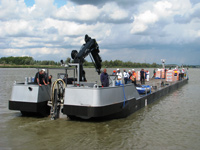 Zulu 01 is scheduled to start operations in the week of 11 August.

On 26 June, Blue Line Logistics launched ZULU 01, the first PSB at the Nieuwe Scheldewerven in Rupelmonde in the presence of Minister-President Kris Peeters. ZULU 01 will now be fitted out to start operations by the beginning of August.

Its companion, ZULU 02 , is also being built in the wharf and is expected to join her sister by the end of August. 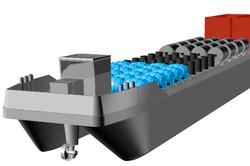 The hulls of ZULU 01 and ZULU 02 are constructed in the hangar of the old Sint Pieter shipyard in Hemiksem. Although some delay was encountered, works are progressing well and delivery is still planned for the end of June.

On 21st of March, Blue Line Logistics increased it's capital and became a "naamloze vennootschap" or Plc. This allowed the entry of professional investment and operational partners in the capital, securing the further development of the company. Additionally, Blue Line Logistics also secured additional financing under the form of subordinated debt.

Blue Line Logistics has started the building of the first 2 PSB's in Belgium. They are expected to start operations in May of this year and will initially be used in the transport of building materials in the Antwerp - Brussels - Herentals area.

The PSB®, or Pallet Shuttle Barge, is a 50 m long inland barge, capable of carrying 300 tons of goods on pallets or in big-bags. It has its own lifting equipment on board and can position itself dynamically through its rudder-propellor and bow-thrusters. This will allow it to operate in a flexible manner along the waterways.

It is crewed by 1 person and is propelled by a 300 hp engine, making it a cost effective mode of transport.